On Tuesday 11th February 2020, the ground-breaking ceremony for the modernisation and expansion of the power plant of the Palm paper mill in Wörth took place.

100 million euros will be invested in the development project. The first gas turbine installation worldwide of a completely new generation from Siemens sets new standards in environmental sustainability. CO2 emissions are significantly reduced despite a 30 percent increase in power generation. Thanks to the increased flexibility of the modernised, highly efficient power plant, it can be started up and shut down very quickly in order to react to and compensate for the increasing load fluctuations in the grid.

With its large-scale power plant project, the Palm paper mill in Wörth is the ideal partner for the energy strategy being promoted by the German government. The German government is pursuing the goal of implementing decentralised power plants based on the principle of localised combined heat and power generation. This concept eliminates long transmission lines and the associated power losses.

The new power plant in Wörth pursues and supports three objectives of the energy transition:

The paper mill in Wörth started production in 2002. It is still the world's largest paper machine for the production of corrugated base paper and continues to be one of the most efficient plants.

Papierfabrik Palm expects the packaging market to continue to grow in the future. For this reason, 500 million euros are also being invested at the same time in the main plant in Aalen. A new paper machine will replace three older plants at the mill from 2021. 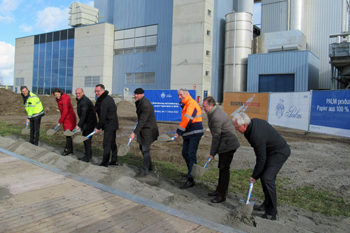